Shall I Trust Others? Grow Together Chapter 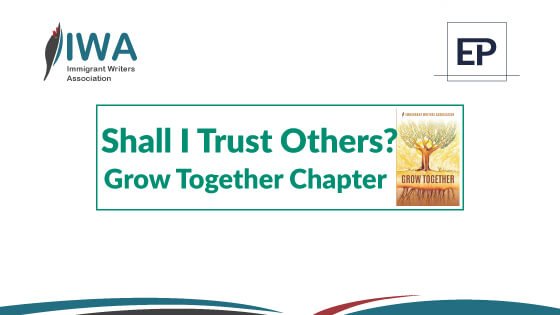 I am Immigrant Writers Association’s marketing manager and I can’t tell you how much this has influenced me. Among other perks, they offered me the possibility to be a published author, by featuring the below story as a chapter, in the association’s second anthology, called Grow Together, released in late 2020. I am sharing the text below. This version has some minor edits from the original published version. You can also check the Cafe New Canadians show where I among three of my co-authors have been a guest.

Funnily enough, I have felt closer to people during this pandemic than I had been feeling for the past couple of years. As we know, everything happens in our heads. Our imagination creates a narrative that’s not real, and if we don’t pay attention – in a moment of weakness – it kicks in and takes control.

“All of humanity’s problems stem from a man’s inability to sit quietly in a room alone” wrote the French philosopher Blaise Pascal. True.

However, nothing interesting, and no progress, will happen otherwise.

Around November 2019, I received a message from one of my dear friends, Tedy Necula, a Romanian film director who was coming to Toronto to showcase his movie’s premiere at a film festival. He was the first Romanian friend I’d seen in almost 3 years. 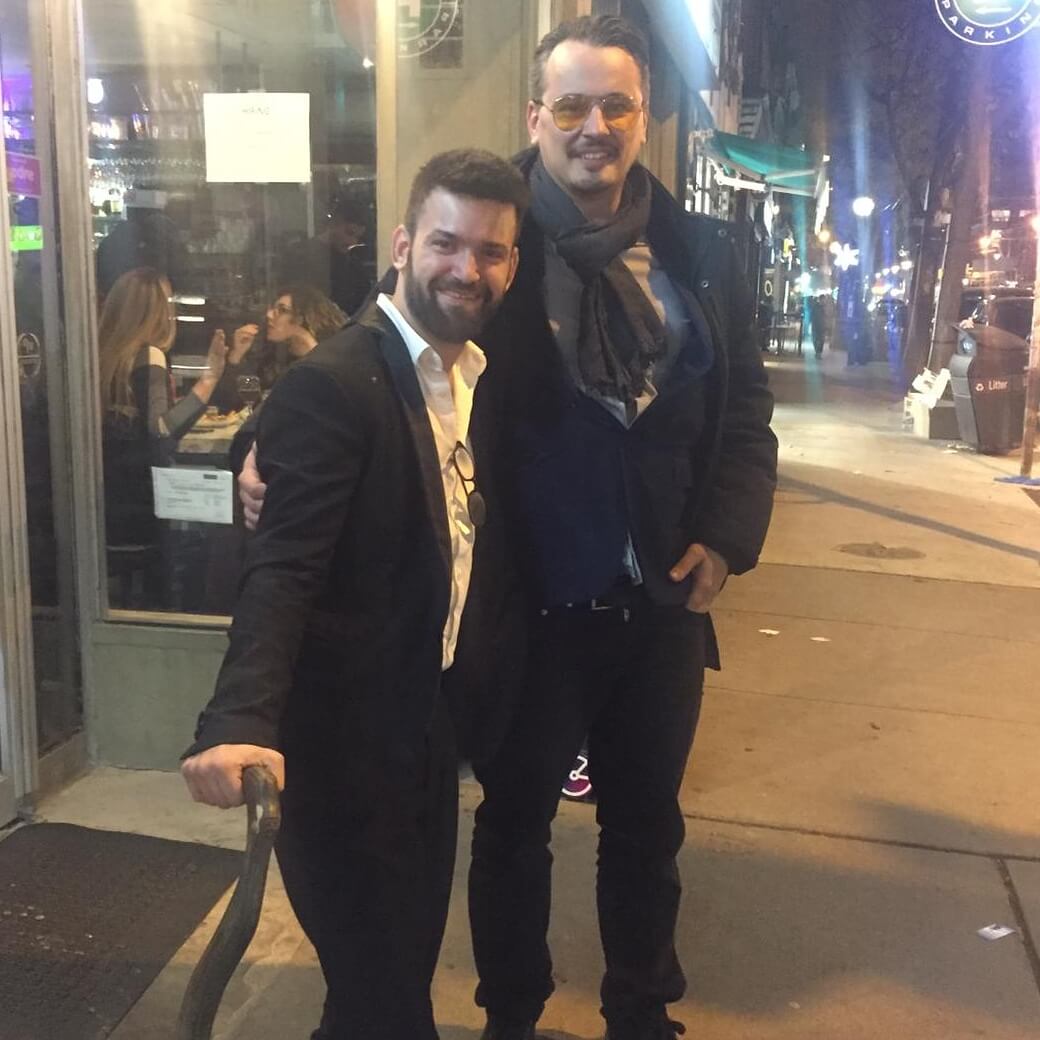 I felt as if he was someone from a previous life – long forgotten. Nevertheless, the reunion was a surreal experience as I enjoyed every single moment spent with Tedy, my dear friend.

He was busy but made an effort to stay for a quick dinner with his good old friend.

At the festival, I heard about “Building Bridges” – a book launched that same day. I went on Amazon and purchased it in the evening. The book arrived after two days; and since I just finished another book, I decided this one would be next, although my antilibrary (unread books) was screaming at me with more important authors and titles.

And since the book was a collection of (short) stories, I gave it a try. I reasoned “I can read one story, then start another book, then come back to read another story from this one, and so on.”

Obviously, none of the authors’ names rang a bell for me, even though some of them were Romanians. While leafing through the book and reading the authors’ stories, I found myself, somehow, relating to most of them as a few years ago, I too was a new immigrant in Canada.

I particularly related to Gabriela Casineanu’s story. She shared the journey of how she broke down after a couple of years of dedicating her time and energy to her job (helping other immigrants adapt to the Canadian job market) and went into detail describing how her body and mind reacted.

I was just recovering from a similar phase where I wasn’t at my best (at all). I had “dizziness” (as I referred to them, dizzy spells to be accurate). My family doctor ran every conceivable test (even a stress test – I was 33), and everything came back normal.

Add to that another episode of Bell’s Palsy. It happens when one of your facial nerves freezes, and you can’t move half of your face; it might resemble a stroke, but it’s a different category of medical events. Having had the first episode in 2013, I now knew what it was in 2019.

Later on (a personal, not a professional opinion), I suspected that a crude mix of unhealthy habits was to blame. I wasn’t eating at the proper times, and then only junk food like frozen pizzas. I was working night shifts and some unpaid internships for a couple of months. Add to that how a series of mental stresses related to my immigrant status was more or less justified, but hey, everything happens in our minds. Did I make the right decision? Will I adapt to the new conditions?

Funny enough, during that time, when I wasn’t at my best, I received the employee of the month award, For being and Outstanding Professional & Person, award that still sits proudly on a wall in my home office.

A medieval legend tells the story of some Romanian knights (from the Romanian provinces back then) who were serving in the armies of the Austro-Hungarian Empire. These knights melted like candles and died after a while.

All the physicians at that time found no particular reason for this mysterious illness and attributed it to homesickness, a condition of longing for the homeland. (I didn’t do any research to back this up, I prefer to leave it as a legend from my memory.) “Dor” is a very powerful word in Romanian, compressing a range of feelings (like grief, sadness, longing) into a single word as not many languages have it. “I miss you” is a construction of multiple words. Even homesick is home + sick, two words put together because the feeling was so strong that a word had to be invented.

Some might argue that saudade, mélancolie, dolium, or doleō (in Latin, the root of the word means hurt, pain) are translations of the feeling that “dor” expresses, and they might be correct, up to a point.

“Dor” is quite empirical (to Romanians). We’re all experiencing it, but it’s difficult to describe it – like time. Maybe I was missing home or my old life although I had made a conscious decision to come to Canada.

By God’s grace and when pure love is involved, things get less complicated. Even so, being an immigrant is not easy. I was lucky enough not to go through all the troubles others had to face in Canada as new immigrants. I landed a job in a relatively short period of six months when most others spend years searching and studying for one.

Being of a curious mind (aka not sitting quietly in a room alone), I took advantage of the day and age we live in and reached out to each author from Building Bridges individually, mostly via LinkedIn. I started a conversation with most of them.

Reading this book was eye-opening, not for anyone reason. I realized I was not alone and had important things to share. I decided that I ought to get myself involved in several projects and start working on some others I already had on my list, but never attended to, leaving them for … a better time.

Since I was an immigrant and had written before (I was never “published” because websites and print magazines don’t count), I asked around how to become a member of the Immigrant Writers Association (IWA) – the Building Bridges book publisher.

Luckily, Gabriela Casineanu was the go-to person in all matters regarding this association. I (still) have some texts that aren’t yet published, and I believe some of them might be a good fit for future IWA projects. I introduced myself to Gabriela and told her what I was all about, and then offered to volunteer for the organization since I am a digital marketer and have some ideas on how we might improve IWA’s online footprint.

She brought it up with the Board of Directors, and soon after, I became the Marketing Manager for the association.

That was easy. Doing the work is not, but it’s an enjoyable experience. All that happened at the beginning of 2020. Since I was feeling better (I don’t want to go into details, but at one point I was avoiding being social and going out because I didn’t know how I would feel), I decided to be more socially active. As in real-life social.

I’ve joined a Toastmasters chapter close to my work (something I wanted to do since 2010 back home in Romania, but always left for … a better time).

Still being of a curious mind, I found some interesting morning business meetings via some Facebook groups (Business Network International – BNI – type – but I didn’t know what these were at that time) and attended. I had never been to a business meeting at 7 AM, so this was an interesting challenge that I gladly accepted. It was helpful that the group met close to my work.

In both places (Toastmasters and the morning business meetings), I found interesting personalities and developed some connections.

At work, ever since they hired me, my bosses encouraged me to do The Forum. I didn’t know what that was all about (later I found out that most of the people from the business meetings and Toastmasters have attended “The Forum”).

Not having done any research in advance, I went for a presentation in 2017 with my boss, and I was probably the only one in the audience of 300 who didn’t sign up.

I told them I wasn’t ready at that moment. My bosses were patient, and in 2020 I decided to join the 3-day course. It was an interesting process (inasmuch as I tried to let The Forum work for me), and yet I sensed I couldn’t even get close to what others were experiencing. I try not to be judgmental as I get older, but I attribute some of what the attendees were going through to a lack of faith, family connections, and the ability to handle emotions.

In my opinion, life is not supposed to be easy.

In the span of just a couple of months, I enrolled in Toastmasters, joined a business meeting group, attended “The Forum”, and took on a marketing role for an association.

Then the COVID pandemic hit.

All that matters is that we’re healthy and try to stay this way. I always try to remind people that health is the most important thing we have (I believe I say this to remind myself primarily). I also say that we should feel safer. This pandemic appeared now, in 2020, when we have many tools and connections that allow us to continue our work remotely and add value to the economy.

Just imagine what would have happened if this had hit us 10 years ago when there were no tools like Zoom / Google Meet/ Microsoft Teams and no smartphones? Try to remember the process of taking a photo with your cell phone camera and sending it to someone 10 years ago.

Ok, so we adapted to the new working conditions; and except for the morning business meetings, everything went online. I graduated from the Landmark Forum via Zoom, and Toastmasters, too, easily shifted to Zoom. It goes without saying that all the meetings with IWA are online on, you guessed it, Zoom.

From all these sources, I expanded my network and developed a couple of relationships that I wouldn’t have if I had not decided to open myself to these new opportunities. In the past, all the successful projects I developed included many people. For some reason, I don’t really know why, I had become some sort of lone wolf, which is not exactly the right way to do certain things.

By making the conscious decision to get involved and let other people into my life, I have grown exponentially. I feel better and look forward to meeting the upcoming challenges. By making these changes, I inspired others to do the same. I believe growth happens not only individually, but collectively as well.

Life might not be easy, but we should not be sitting quietly in our rooms all the time.

Google and Wikipedia deliver results because everyone is contributing. They made Encarta, Le Petit Larousse, and Encyclopaedia Britannica almost obsolete. They did it by allowing the community to contribute to the world of knowledge and experience. These are the modern digital platforms where the members of the public can share insight and expertise.

This chapter, for example, will see a significant improvement only if I show it to others. It’s a matter of trust, and we need to trust others.

It’s a step I needed to take in order to grow (together).